The conversation was calm to start with, and quickly became more demanding the further the plane traveled without responding. Eventually a response came out of the Cessna pilot. 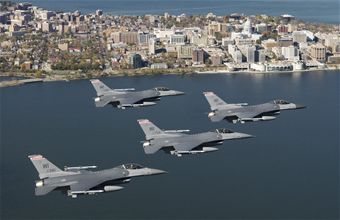 "I have a special package to deliver to the people of Bailey’s Harbor.”
The mood immediately intensified. Within seconds, the jets were circling the plane, demanding the pilot land. Around and around, they kept circling, kept calling out commands.

The training scenario had reached a logical conclusion, and the objectives for the day met. The fertile keynote, a term used to describe practice intercept missions, was complete. The 115th Fighter Wing F-16 Fighting Falcon pilots were heading home for the day.

This training is critical to the aerospace control alert (ACA) mission as pilots familiarize themselves with the airspace and train for potentially serious events or incidents that threaten homeland security.

"Fertile keynotes are a great way for everyone involved to enhance their readiness without shutting down significant portions of the airspace system,” said Maj. John Sacia, 115th Fighter Wing ACA director of operations. "We practice throughout the Midwest to find weaknesses. No one knows where or when the next attack could be. It is incumbent on us to maximize the home field advantage.”

The events of 9/11 exposed some weaknesses in the national defense infrastructure and procedures, Sacia said. "No one was doing anything wrong, but the system was not being tested on a regular basis,” he said.

So, the 115th Fighter Wing aerospace control alert mission was born, and the pilots began training more. Now, 15 years later, the ACA mission pilots are still making training a priority. The F-16 pilots practice various scenarios such as someone stealing an aircraft, a pilot violating temporary flight restrictions, a student pilot flying without an instructor due to a heart attack, or directing a lost pilot to safety. The scenarios they practice represent real-life situations they could face.

Pilots from the Wisconsin Civil Air Patrol have been helping the fighter pilots practice the ACA missions for more than 10 years. One of the Civil Air Patrol pilots, Ed Wagner, is also a full-time technician at the 115th Fighter Wing.

"Senior Master Sgt. Wagner is an unsung hero,” Sacia said. "His involvement is an intangible asset that we often take for granted. Wagner can help connect the dots between the Air Force speak and the civilian side. He also understands the logistics from both sides which truly enhances the working relationship between the CAP and the 115th Fighter Wing.”

Wagner has been volunteering his time as a pilot in the CAP since 2004. "I was looking for a way to keep my pilot skills sharp,” Wagner said. "The fertile keynotes help us both get our training in, the CAP and the Fighter Wing. We are given the instructions on what the scenario looks like before we go up. We try to make it as realistic as possible, but there are always variables.”
The pilots at both ends keep the scenarios realistic, and keep each other on their toes.

"Being so slow, I’m not going to be able to get away from them,” Wagner said. "But, I do try to evade them by ducking down low beneath the cloud cover. This keeps the scenario more realistic so they can practice what they’d do in a real-world situation.”

If there were ever a real-world event, the fighter pilots would know exactly how to handle the situation because they have been practicing, and they have dealt with the scenarios they think may happen at some point.

The scene may look scary to civilians watching from the ground, Sacia said. "Since 9/11, people get worried when they see things in the sky that are out of the ordinary,” Sacia said.

Notifying residents of the keynote exercises beforehand would be nice, but unfortunately, that significantly degrades the training, he said. "For those who see us chasing a Cessna in the Wisconsin skies, rest assured we’re just completing training designed to keep our citizens safe,” Sacia said.